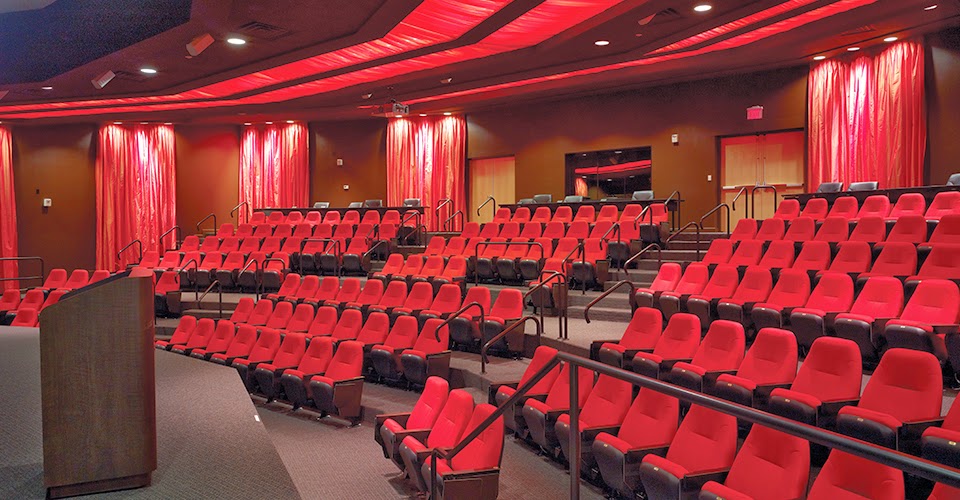 INT.  AUDITORIUM.  BRICK AND SIENNA ARE ON STAGE TALKING WITH THE REPETITEUR.  RUBY, MICHAEL AND RIVER IN AUDITORIUM
RIVER
Sorry to pull you away from rehearsals Uncle Mike, but Mum wants to have a quick chat to make sure we haven’t missed anything for the launch party.

RUBY
Yes. The meeting was a debacle and I don’t feel confident that we covered everything.

MICHAEL
Well, if your good for nothing husband would just teach Flora some discipline, everything would have been discusses when it was scheduled to be discussed.  Of course, you can’t teach a quality you don’t possess yourself.

RUBY
Oh Michael, I am really looking to you to be the grown up here.  We all know what those two are like.  Someone has to stand up and be the bigger man.

MICHAEL
That certainly won’t be Edward then!  Why do you keep him around?  You know he is unfaithful and he is such a bad influence on Flora.  I have never seen a daughter treat her mother with as much contempt and disrespect as she has for you.  I am not saying you are perfect, but nobody deserves what you get from those two.

RUBY
I know, but I love him.  I truly do.  And she is my daughter. I can’t abandon her.

RIVER
I am your daughter too Mum.  You sent Brick and I away to school.  In some ways you could say you abandoned us, yet neither of us treat you anything like that!

RUBY
Oh River.  Don’t say that.  I didn’t mean to abandon you.  Either of you.  I was a mess when your father died.  You know that.

RIVER
I know Mum.  Don’t get upset.  I wasn’t trying to make you feel bad.

MICHAEL
Alright.  Enough of this.  We are not going to solve this problem today and I really do need to get back to the rehearsal.  What do you need to know?

RUBY
I really just need to confirm the order of proceedings, and make confirm you will join me in making the launch speech.

RIVER
Here is the draft programme.

MICHAEL
One change.  We will be doing two songs now.  Brick and Sienna will still be doing ‘I Hope I Get It’, but as a duet, and they will follow that with ‘What I Did For Love’.

RIVER
So Flora is out of the programme completely?

RUBY
Oh Mike.  Isn’t there any way we can include her?

MICHAEL
No, Ruby.  I am sorry, but she is unreliable and it is only two days away.  She doesn’t know the song, she hasn’t rehearsed the choreography, and she won’t finalise a costume.  There is nothing I can do, and it is unfair to Brick and Sienna to have to perform with that uncertainty.

RIVER
I have an idea, if anyone is interested.

RUBY
What is that, River?

RIVER
If Flora really wants to perform, perhaps she could sing after the formal programme has been completed.  I was thinking something like a cabaret feel while everyone is drinking and chatting.

RUBY
That is a brilliant suggestion River.  You know, we may also be able to get Edward involved.  He might be willing to do something with his daughter.  You know he would do anything for her, and his natural showmanship should be unable to resist the offer.  Especially if he can choose the song.

RIVER
I don’t know if Emerald will have time to pull any costumes together.

RUBY
No problem.  Edward can wear his tuxedo and I will send Flora out to buy a gown.  She loves shopping anyway.

MICHAEL
That is all well and good, but they will have to find their own pianist too.  Gustav won’t have time to rehearse for us and also them.

RUBY
Great.  We will go with this plan.  I will speak with Flora and Edward.  River, can you make sure that Brick and Sienna know they have to make themselves available to woo the audience after the performance?  I know I am bankrolling this venture, but I want to start developing investors and patrons into the structure as soon as possible.

MICHAEL
One last thing.  I don’t think I will have time to write a speech for the launch.

RUBY
I will deal with that, don’t worry.  I will get the draft to you tomorrow.

MICHEAL
Great.  I have to get back to rehearsal now.  (walking to the stage) Alright everyone, back to work.  I want to go over the first number once from the top, no breaks.  (River and Ruby stay to listen to the song).

November 13, 2018
CHAPTER 18 The Awkward Organisation
LISTEN HERE
Scene 1: The Awkwardness Brick and Kirana continue their awkward conversation in the Dramaticus foyer.
FEATURING: Justin Groves and Samsara
Scene 2: The Organisation River and Frank take one step forward and then one step back in their budding relationship.
FEATURING: Daniel Brasher and Imbi Leili Ling
Scene 3: The Destruction Flora loses control of herself and makes the biggest mistake of her life so far.
FEATURING: Jaq Avery
Scene 4:  The Panic River has prepared a surprise for Sienna but it is both of them who get the surprise.
FEATURING: Imbi Leili Ling and Jaclyn Lombardo

April 14, 2019
CHAPTER 25 The Pleading Future LISTEN HERE
SCENE 1: The Future (part 1) Frank wakes up in the early hours of the morning and decides to wake River up too.
FEATURING: Daniel Brasher and Samsara
SCENE 2: The Pleading Ruby takes an early morning Skype call from Flora who has hatched a plan with Sophia.
FEATURING: Jaq Avery, Malaynee Hayden and Maree Shefford
SCENE 3: The Future (part 2) The alarm wakes Frank and River again and as they get ready for work they talk about the future.


LISTEN HERE
Scene 1: The Convincing Ensemble Salon Flora convinces the French couturier to the stars Henri to dress her for the launch.
FEATURING: Jaq Avery and Damian Vuleta
Scene 2: The Insinuation The Dramaticus Stage Brick discovers Edward is making moves on Kirana
FEATURING: Scott Knight, Gabrielle Savrone, and Justin Groves
Scene 3: The Fantasy part 1 Ensemble Salon Flora enjoys a personal runway show of the Princess Collection
FEATURING: Jaq Avery and Damian Vuleta
PLAYING ON Samsara sits down with Jaq Avery to find out a bit more about her career and the difficulties encountered by Flora Drummond.

THE AMBITIOUS ACT CAFE - The actors and artists cafe

Samsara
Hi, and welcome to my blog. I am the writer and producer of the podcast soap opera The Players and I am a reviewer, playwright and director, having completed the Masters in Writing for Performance at The Victorian College of the Arts (University of Melbourne) in 2016. I have almost two decades experience in the live performance industry, and have been a reviewer of theatre, dance, circus and events. www.theplayerssoapopera.com www.whatdidshethink.com